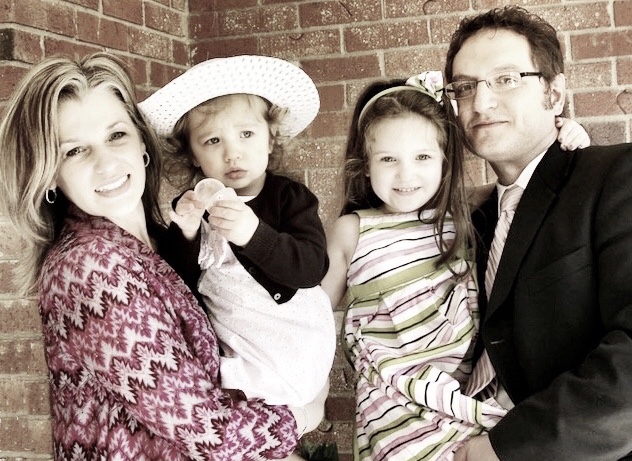 This Easter photograph from 2012 always stirs my emotions, not because my babies are growing up too quickly or because of fond Resurrection Sunday memories, but because of what I was battling.

It is a precious photo of my family, but the truth behind my Easter smile is that I was ill from sleep deprivation. I was in the middle of a six-week doctor-ordered process of breaking a lifelong bedtime habit, resulting in little to no sleep night after night. The harm this habit had caused to my body over my lifetime was discovered after I sought care following a dramatic car wreck in which I pulled out in front of a semi and totaled our Jeep.

Just weeks before this photo, I’d been verbally abused and physically threatened by someone in a series of horrific phone calls. The threats increased my fear when our little Lillie went missing at church that morning. The service started late because everyone was looking frantically for her. When she was found I dissolved into tears in the sound room while the choir entered the platform. I was in no condition to lead triumphant Easter hymns, but His strength is perfect.

I see this photograph and feel compassion for that woman of 2012. She could never have imagined that far worse difficulties were in store, the kind of difficulties that could utterly destroy her and her family. I want to tell her that brighter days will come, but that they will be coupled with more dark days. She should know that hardship prepares her for greater hardship. But I would also explain that the scars will serve her well. None of them will be wasted. Most importantly, the Lord is faithful through every trying moment, offering His hand of mercy, conviction, guidance, and grace.

As I look back on those five years of trial, I understand more clearly what my sovereign Lord was doing. His plans always hold specific purpose. Though I’m thankful to be on this side of that season, I do not know what the next one holds. But what I now know with great certainty is that there is nothing too difficult for Him. Because of my union with Christ, there is also nothing too difficult for me.

Ah Lord God! Behold, You have made the heavens and the earth by Your great power and by Your outstretched arm! Nothing is too difficult for You.  (Jeremiah 32:17)